One Book One Brant Author Event 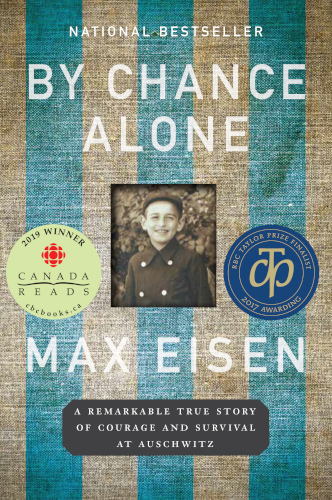 By Chance Alone by Max Eisen ... Let's Read Together!
For the uninitiated the concept is simple: Borrow a copy of By Chance Alone by Max Eisen from the Library beginning Thursday, February 18.  Readers are automatically entered into our prize draw.
One Book One Brant Author Event: Hear Max Eisen Live!
Free program; registration required as space is limited.
Don't have a Library card? Complete our online application form for your free membership!
A link to access the workshop via Zoom will be provided in an email to participants the morning of the event. BE SURE TO CHECK YOUR JUNK MAIL FOLDER. You can view system requirements here: https://support.zoom.us/hc/en-us/articles/201362023-System-Requirements-for-PC-Mac-and-Linux

Max was born in Moldava, Czechoslovakia. When he was ten years old, Hungary occupied Slovakia and eventually in 1944 his family was deported to Auschwitz-Birkenau where most of them were immediately murdered in gas chambers. Max, his father and uncle worked as slave laborers, but 2 months later his father and uncle were selected out for experiments never to be seen again. Max managed to survive the Death March in January 1945 and camps at Mauthausen, Melk and Ebensee in Austria. He was liberated by the American 761st Black Panther Tank Battalion on May 6th 1945. Eventually he returned to Czechoslovakia where he spent 3 years in an orphanage. Max arrived at Quebec City in October 1949 en route to Toronto where he currently resides.
In 2016 Max Eisen released his memoir ‘By Chance Alone’ published by Harper Collins.

Cancellation of Program by the Library

Cancellation of Registration by the Registrant

You must log in to register for this event.
Oops! - There was a problem in authenticating your card: